Heaven of Bikers 1 month ago

Join us as we highlight the wildest, scariest, most must see motorcycle drag racing crashes and drag bike wrecks, accidents and mishaps ever captured by Cycledrag. In this video we see a Kawasaki ZRX street bike slip in its own oil against a HAYABUSA and go down, a nitrous Real Street HAYABUSA flip over and loop it out, Top Fuel Motorcycle legend Larry “Spiderman” McBride burst into flames, a stretched GSXR 1000 wheelie and crash, a HAYABUSA slip in its own fluids after a burnout, Spencer Claycomb crash his Real Street HAYABUSA on the top end at high speed, Nitro Harley racer Michael Beland blow up and torch a head at the hit, Cycledrag photog Jeff Mundale spin hard and go down on his wheelie bar HAYABUSA, Supercharged Nitro Harley racer Tak Shigematsu hit the wall, a red GS drag bike racer hits the wall, a Honda CR Dirt Bike – Drag Bike crashes after a burnout at RMC, a man on an old school Katana Street bike rides out a wheelie and makes the save of the century, a Harley Bagger lays it down and crashes after a burnout, a Nitro Harley collides with a Top Fuel Motorcycle bending the wheelie bars, a Kawasaki ZRX drag bike explodes and blows up the engine, a NHRA nitro Harley rider grabs too much front brake, a Top Fuel Harley blows up, a female motorcycle sportsman racer has a clutch malfunction at Maple Grove Raceway, a Pro Fuel Harley rides out a cracked wheel, a starter cart gets stuck inside the motor of Jay Turner’s NHRA Nitro Harley, a chain breaks on a Pro Street turbo HAYABUSA, Larry McBride hits the wall at over 200 mph on his Top Fuel Bike, which crashes into the guardrail in 1992, Tom Blair crashes on the top end of Keystone Raceway Park in 1997 on his GSXR street bike and a drag bike bends the chain adjuster and frame! The good news here is all of these racers survived and recovered. We see the great motorcycle builder Jesse James at the end. Let us know what incident you think Is the wildest. 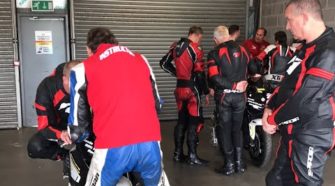