This is a truly special piece of American history, a rare and remarkable glimpse into the high stakes sport of professional board track motorcycle racing during the Prohibition Era. Shot at the height of the sport, the film not only captures an intimate perspective of what it was like to race on America’s infamous board track speedways, but the race itself represents the high water mark of the sport since its inception. It showcases some of the world’s most iconic pioneer motorcycle racers as well as some of the most revered and highly specialized machines ever built, all hitting record competition speeds at a time when the culture was at its most appealing.

Though many are aware of the romanticized days of the board track motordrome, by the outbreak of WWI the small, circular American motordromes had already began to fade into the history books. What we see here was one of the crown jewels of the second generation of board tracks, the speedways. The 1.25 mile-long Los Angeles Motor Speedway, also referred to as the Beverly Hills Speedway was 1 of the 22 board track speedways built between 1915 and 1928. These massive wooden ovals, America’s timber circus’ became popular during the roaring twenties, though like their shorter circular relatives, the motordromes, the speedways too fell out of fashion within short time after their introduction. However, compared to the frenzied and often times violent motordromes, the larger, safer speedways gave the sport a proper venue for achieving breathtaking new speeds. It was on the speedways of the late-teens and early twenties where man and motorcycle first hit speeds of 100 miles an hour in competition, where countless world speed records where set, where heroes became icons, and where the high dollar, high stakes game of factory team racing duked it out during the final days of the first golden era of motorcycle racing.

This film comes from the M&ATA opening races at the Los Angeles Motor Speedway on April 24th, 1921. Speeds exceeded 100 mph averages throughout the day with a field of racers that could only be described as overflowing with legends. Ray Weishaar, Joe Wolters, Jim Davis, Otto Walker, Ralph Hepburn, Gene Walker, Freddie Ludlow, Curly Fredericks, and Shrimp Burns all lined up for the “Big Three,” Harley-Davidson, Indian, and Excelsior. This was the grand age of factory competition, overhead valves machines, lionized competitors, and lightning fast races. As seen in the film, former Harley-Davidson Wrecking Crew member Shrimp Burns, who was now the star of the Indian camp, covered 13 and 3/4 miles in the miss and out race in just under 6 minutes, an average speed of 103.78 mph, charging past Harley’s Otto Walker at the finish line and beating him by only inches.

Shrimp then crashed out in the 25-Mile race on the 11th lap at 106 mph, which Otto Walker later beat out Jim Davis, Gene Walker, and Joe Wolters to win. Otto Walker also set a new M&ATA record for the distance with an average speed of 104.43 mph. While Shrimp was carried off to the hospital his teammate, Indian’s Curly Fredericks on a factory stock Power Plus was leading the 50-Mile event, but he too crashed on the 9th lap. Fredericks complained his spill was due to dirty racing, but the officials could find no evidence of the fact, Harley-Davidson’s new kid Jim Davis won the 50-Mile followed by Ray Weishaar, Joe Wolters, and Fred Ludlow.

By the final race of the day, the 15-Mile, Shrimp was back from the hospital, splinter free and ready to run, though heavily bandaged. He piloted Frederick’s Power Plus as his 8-Valve was down for the count and immediately jumped to the front of the pack. Shrimp hit 102.55 mph on the stock pocket valve motor, setting a record as the first stock engine to do over 100 mph in competition, and winning the race in front of Ludlow and Hepburn. Indian’s most tenacious young star Shrimp Burns gave one of the most sensational performances of his career that day in front of 12,000 spectators at the Beverly Hills Speedway, and thankfully it all is captured here in this invaluable film for us to enjoy.

For more on the race at the Los Angeles Motor Speedway, as well as countless other fascinating stories from the earliest days of American motorcycle culture check out the countless, exclusive articles at www.ArchiveMoto.com. Be sure to follow along for weekly updates on Instagram and Twitter by subscribing to @Archive_Moto. 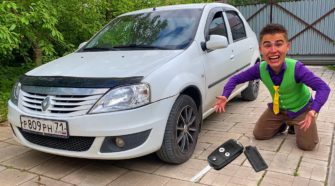