Thanks for watching the NHDRO World Finals Round 6 Season Finale, sponsored by DME Racing/Pro Stock Inc, a three day all bike only, motorcycle drag racing event hosted at Lucas Oil Raceway in Indy. September 30-Oct 1st 2017. This is the fastest track in the Midwest! Special thanks to the incredible facility, personnel, and track crew at LOR!

If you like this video, please like share and comment, these are the things that keep this stuff alive! A simple hello in the comments from my regular viewers help a lot more than you might think! Sharing this video from your social media would be one of the biggest things you can do to help me make more videos like this in the future. Thank you everyone who watches and subscribes to my videos!

Now on to this epic three day show-down between some of the fastest bikes on the face of the planet in the Quarter mile! The Pro Street and Grudge Bike action is off the hook in this video, with big bets, a big win and a big wreck when the #rogerthat army of Kawasaki Zx14 grudge bikes that comes up from the South to face off against the Midwest!

In the Pro Street class we have an epic collection of sick-fast turbocharged motorcycles facing off with some Suzuki Hayabusas putting down over 600-700hp and producing up to 225 mind bending MPH! Witness the Team of Killers from Williford Racing running at the front of the pack with 6.6 and 6.7 second passes in this video. Other assassins of note, is the Team Honda and Stotz Racing putting the worlds fastest 1000 into the 6.7 second zone for the very first time, revealing the true potential for this bike to hang with the biggest and fastest Suzuki’s!

This awesome 3 minute intro music (Turn the Volume Up!) is composed by Ross Bugden, and the song name is called “Welcome to Chaos” and is best heard on a good stereo/speaker system to hear the bikes and the music best. This cinematic intro is royalty free, and found in the community commons and available for anyone to use, all you have to do is add this info here:
The Song

00:01 – 02:58 The Intro, showing you some of the action you will see in this 40 minute documentary video of motorcycle drag racing!

04:19 Richard Gadson rides a wicked Suzuki Gsxr-1000, stretched with spray on a street tire… Richard goes a little left and has to let out… more passes of this bike later.

05:12 HEARTLESS (Kill Bill) vs FAMILY MAN (Vince) lining up to race the first time and Vince has some major issues at the burnout box and will not start up! The #ROGERTHAT team is very gracious and allows Vince some time to figure out the problem.

5:50 Vince and his badass pit crew get his bike working again in short order and now we are about to actually race, both bikes are at the starting line, here is the race. Vince gets a bike length head start (the back tire) and to win the race Kill Bill will have to beat him by at least a bike length at the finish line and we are only racing to the 1/8th mile!

09:35 Youtube user “JonP” comments below, he can “smell the clutch from here!”

17:07 Kill Bill makes another test pass on “HEARTLESS” a nitrous Kawasaki zx14 from the #ROGERTHAT team, beating up a turbo gixxer flat slick bike during test and tune.

18:39 Kill Bill on top of “GUERILLA WARFARE” in the far lane from the #ROGERTHAT Camp destroying a Hayabusa having problems.

19:22 Its going down right here, THE RE-MATCH! Kill Bill on “HEARTLESS” the ultra fast blue Kawaski Zx14 on a street tire, so confident and deadly he is giving up the back tire, and has to clear the Hayabusa by at least 1 bike length verified by video… are you serious!!!

26:38 Youtube user “Dirty Purdy” commented below, “Man they was both asleep!”

If you liked this video, check out my newest Nhdro event compilation, full of sick grudge bikes racing for $13k:

Want to see my newest Motorcycle Drag Racing video? Here it is:

Looking for the official event photos shot by Aries Xecutioner at this event? Well here they are:
http://www.dragbikephotos.com/2017-NHDRO-World-Finals

Want to know more about this race, class rules, registration fees and event schedule? Then check out the official website here: 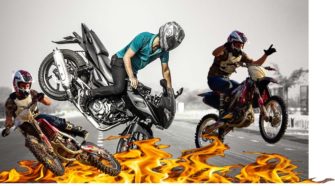