Heaven of Bikers 1 month ago

We’re lifelong video game enthusiasts with a passion for showing the world how our favorite hobby has grown with us, from individual series to industry-wide retrospectives.

We put significant time and creative effort into each one of our videos, including research, digging into archives, recording voiceovers, and editing. Every video takes as many as 10 hours to produce, because we strive to give our fans consistent, high-quality content.

Our popular “Evolution of…” series goes far beyond simply presenting gameplay footage. We take the time to show how a video game property — its gameplay, character designs, graphics, sound direction, etc. — have evolved over time. We include unique voiceover work on each video to enhance the viewing experience.

People have been playing video games for decades. In that time, we’ve gone from moving a white line up and down to block a moving pixel, to participating in full-fledged, painstakingly rendered real-time battles with people all over the world. We help older gamers look back on how these experiences have changed throughout their lives, and new gamers to understand the broader context of the series they’re playing for the first time today.

Recording, Editing, and voice over were made by me.

I had a dream bike stunts 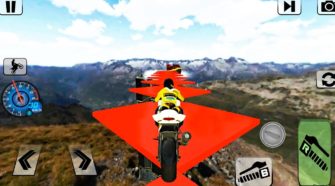