Motorcycle Crash Fail 2016 the first time on a motorcycle #9

Insane extreme freestyle motorcycle stunts on the highway. Police taunts , chases and escapes. Video features footage from annual Middle Of The Map Stunt Bike Street Ride held in Kansas City, MO. Watch as hundreds of motorcyclist unite to perform tricks and stunts on the street’s. Some of the riders just enjoy taking part in the ride to watch other fellow riders showcase there unique stunt riding skills and talent. The video mostly consist of trilling freestyle street bike stunt riding on the highway. Riders perform wheelies, drifts, burnouts, and many other insane stunt bike tricks. At the beginning of the video clip you’ll see a extreme motorcycle stunt rider that links many different wheelie combinations tougher this is know as a combo wheelie. This is where a stunt rider does many different tricks in one signal wheelie without setting down the front wheel. Some riders can ride wheelies for miles at high speeds on the highway or street in tons different positions on the motorcycle such as standing on the seat and then jumping to the tank sometimes with both feet over the handle bars sitting in the tank this is know as a highchair. Their our many stunt riders featured performing dangerous tricks on the street’s. Towards the end of the video you’ll see three different motorcycle stunt riders crash attempting to perform stunts during the ride. Each of the motorcycle accidents our epic fails of stunts gone wrong on motorcycles. All video footage shown is from the 2014 Middle Of The Map Street Ride captured in clear high quality 1080p HD. The video clip was filmed with Go Pro Hero 3 black edition action camera and Cannon HF G10 camcorder.

Men and Motors 15 hours ago 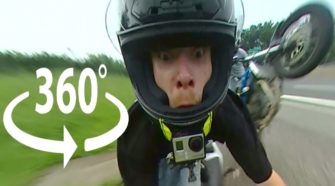