Stunt bike rider performs stunts such as wheelies in downtown Saint Louis, MO which draws the police’s attention. As a result of the motorcycle stunt rider doing tricks such as riding a wheelie directly passed a cop car sitting at an intersection. The police officer try’s to pull over the motorcyclist performing stunts but the biker doe’s not have time for that so he doe’s not stop for the cops thus starting a high speed chase with the cop car flashing it lights and sirens in hot pursuit of the street bike stunt rider. From this point on the rest of the video is bike vs cop because neither one was going giving up easily without a fight. As you’ll see both the biker and cop car race throw the street’s of downtown STL splitting automobiles in heavy congested traffic. Watch the video an you’ll see who wins. This motorcycle police chase was filmed from two different angles and two different camcorders. 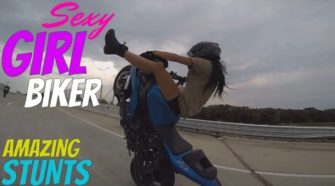