Watch as small group of motorcycle stunt riders terrorize the streets of downtown Saint Louis, MO for street stunt riding session. You’ll see insane street bike stunts an tricks performed on public roads with no regard for law enforcement or traffic laws. As you can clearly see shown during the video when one of the stunt bike riders doe’s a long combo wheelie in the heart of downtown Saint Louis in close proximity to the world famous arch an when the stunt rider hits a red light traffic signal the stunt rider amazingly continues to wheelie without setting down the front wheel going straight into circle wheelies at the red light when a police officer in patrol car tries to pull over the stunt rider stunting directly in front of him setting up a bike vs cop scenario an the stunt bike rider didn’t look like he was to worried about being chased by the police or getting caught an arrested by cops. This video features some of the most skilled street stunt riders in the nation performing some of the most difficult motorcycle stunts in the sport. Some of the motorcycle stunts you’ll see in this video our combo wheelies, 12′ o clock scrapes, drifting, burnouts, and stoppies plus much more. Check out some of the top street motorcycle stunt riders from Blox Starz an Streetfighterz stunt teams along with many other highly skilled stunt riders. Most of the street bike riders in this video our riding bikes known as stunt bikes. A motorcycle that is specially build for stunt riding. A few of the most popular modifications are rear hand brake mounted on the left side of the handle bars, crash cage, 12′ o clock scrape bar, sub cage, an bigger rear sprocket + much more bases on pacific riders preference. All the footage shown in this video was shoot on the same day in Saint Louis, MO an shrouding area’s. Most of the footage was captured with Go Pro Hero 3+ helmet cams an with Cannon HF G10 with Opteka super fisheye 0.3x HD death lens. We hope you enjoy what we caught on camera. 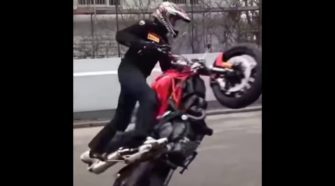