INSANE Motorcycle Accident Video 2016. Motorcycle drifting at high speeds on the highway crashes. Watch stunt rider on Honda CBR1000RR street bike performing drifts between and around cars a crossed multiple lanes of traffic on I-70 highway. The motorcyclist holds throttle wide open while spinning the rear tire leaving a trail of smoke behind on the freeway. The motorcycle crash was caused by drift stunt gone wrong that ends in epic fail. The video was filmed on I-70 a large public highway that runs through Saint Louis, Missouri area. The make and model of the stunt bike seen crashing is 2013 Honda CBR1000RR Fireblade 1000cc liter bike. Luckily the rider featured wrecking in this video was not seriously injured as a result of the crash. Amazingly the sport bike rider was able to get up and hitch a ride with another biker immediately after the accident. However his motorcycle was not as lucky. After the accident the motorcycle was not ride able. This video serves as a great reminder to all motorcycle riders to always wear proper protective gear such as full face helmet, leather jacket or padded nylon jacket, long pants, and gloves because no matter your skill level or the type of riding your doing you got to remember if your on two wheels soon then later your going to crash and may not be as lucky as the motorcycle stunt rider shown crashing in this video. 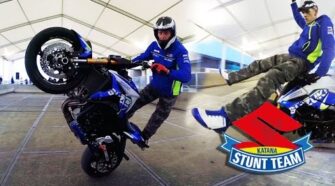