Is this a bike race or a video game? | Mare Island Pedalfest 2021

guy messing around and gets thrown from his bike. Click this link To watch all 80 crashes captured over the past four years. http://www.youtube.com/playlist?list=PL467A2492C0B9CBFF
Mulholland Highway in Los Angeles has been a mecca for motorcycles & fast cars for decades. Car and motorcycle clubs are regular visitors every weekend. Jay Leno can often be found at the famous Rockstore and at a view point called Lookout talking with fellow motor enthusiasts. Crashes are common as well as a heavy police presence on most weekends. The Snake is a two mile section of Mulholland above the Rockstore. Riders usually will make multiple runs allowing me to move from corner to corner when assembling rider videos. The speed limit is 45 mph, most riders are not going much over that so the majority of tickets are crossing the line, wheelies or equipment violations. Bicycles are up here all the time but motorcycles and bikes seem to do fine together as long as the cyclists are willing to stay to the right. Cars passing them are a bigger problem since there is no shoulder and most turns are blind.
I mainly shoot on the last corner coming up because I can see much of the road and photogs are expected. The turn gets it’s fair share of crashes but people crash other places also just no one is filming. The top corner I shoot seem to average one crash every couple weeks in the summer, out of many hundreds of riders. 911 emergency services are rarely called and accidents are seldom reported since most riders do not get injured severely. Google Street View – http://goo.gl/wsMi 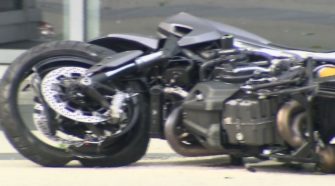