Sportbike stunt riding through The Philippines

Retired At 28. My Motorcycle Racing Career.

It’s a motorcycle drag racing engine explosion for this special, one of a kind, Bo OBrochta tribute supercharged Ducati drag bike ridden by Top Fuel Motorcycle veteran Sam Wills. The reason this motorcycle engine blows up is the Team was going for a special run and put 20 pounds of boost to an engine that featured many stock parts. Wills told us the bike just wasn’t meant to handle that much power.

As for the story behind the paint scheme, it’s a tribute to one of the most successful Top Fuel Motorcycles of all-time, the Bo O’Brochta Top Fuel Nitro Motorcycle that won best engineered on several different occasions. Bo’s bike is on display at “Big Daddy” Don Garlits Museum of Drag Racing in Ocala, Fla. and is a must see for anyone passing by on I75. Wills built the original chassis for the bike which was intended for B Fuel. OBrochta rode the bike from 80-83 and Sam took over in 84. The bike went 7.08 in 1981 and won 94% of the races it entered. When Sam was done riding it in 84, he said put this thing in a museum before somebody gets killed. It was not much fun for Sam to ride. Enjoy and share this video with a motorcycle friend!

Next MoToRcYcLe StUnTs (MUST SEE!) 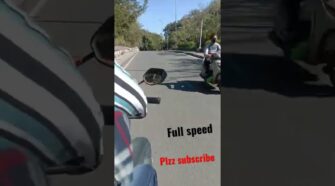 OUR LIFE our choise✌ 4 months ago