The NHRA Auto Club Finals saw arguably the greatest upset, improbable underdog tale when 22 year old female rookie Jianna Silanas stunned the Pro Stock Motorcycle class by going from barely qualifying to becoming the deciding factor in the NHRA drag bike championship chase. Salinas took out three former Pro Stock Bike champions, all needing to win to keep their championship hopes alive. Come on this ride as we take you behind the scenes and meet Jianna’s team and family, including her father, Top Fuel dragster racer Mike Salinas. We begin with Salinas heading into final qualifying unsure if she would make the field, touch on her memorable crash in Joliet then talk to her about how she was able to run a career best when she needed it most. We hear about the bounty EBR Buell racer Matt Smith puts on Vance & Hines Harley Davidson racer Andrew Hines, to her showdowns with Steve Johnson and championship hopefuls Matt Smith and Jerry Savoie to her celebration on stage and in the winner’s circle with her family, we follow it all! This has to be a 1 in a million story. Video courtesy of NHRA. Enjoy! 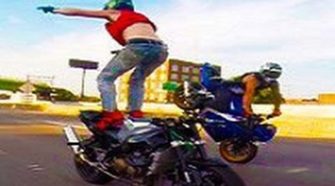